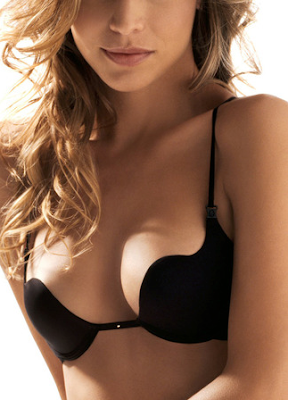 I like boobs. I’m a straight woman,
but really, who doesn’t appreciate
them? Robots. Reptiles. Sauron. That’s
about it. And I’m not even positive
about Sauron. He might have, at some
point, before he was all disembodied.
Breasts are awesome. As feminist
writer Gail Collins said in her New
York Times piece, “Everybody likes
breasts — infants, adults, women,
men. Really, it’s America’s most
popular body part.” But sometimes it
seems like we only get to talk about
how awesome certain kinds of boobs
are. The ones that are bold, perfectly
round, Sports Illustrated-style,
belonging to Christina Hendricks, full,
plush, generous, prominent, and just
generally big.

Those words do not describe my
breasts, but I like mine anyway. For
some reason, I never learned to be
ashamed. I listened to my brothers
(and the world) make enthusiastic
comments about well-endowed
women, and, although I had a few
moments of “Seriously, God? Where’s
the rest of my chest? YOU FORGOT
SOMETHING,” I grew up generally
liking the way I looked. It could be
that there’s something wrong with
my brain. But I think it’s more likely
that small boobs are pretty great.
Here’s why.
1. They are cute. They just are. They
look friendly and happy and sweet.
2. You can wear something really low-
cut. I don’t dare, because I am scared
of things no one should be scared of
and also freakishly modest. But in
theory, you can. And you probably
should, if you have small boobs. Just
to do it.
3. You don’t look “slutty,” necessarily.
Sluttiness is a dumb concept. No one
should be thought slutty at all,
because it’s just dumb. And certainly
no one should be thought slutty based
on the basic shape of her body. But it
happens. When my large-breasted
friends walk down the street in a
parka and plaid overalls and clumpy
work boots, they get uninvited
attention of a sexual nature, because
of their breasts. I know, because all of
my large-breasted friends wear that
outfit, all the time. But to my point: I
wear that same thing, and I get no
attention at all. Which is nice. And
then I wear a scandalously sexy, skin-
tight outfit, and I also get no
attention! I’m kidding. What I mean to
say is, people say, “Oh, that looks
nice! You’re so elegant.”
4. You can look elegant pretty easily. See
above.
Related: 10 Reasons Big Boobs Are
Awesome (And 10 Reasons They’re Not So
Awesome)
5. The nipples are showcased. And
nipples are interesting. I don’t want
to say much more about nipples,
because it makes me feel awkward
and inappropriate. But I think they’re
pretty. OK, that’s it.
6. You can sometimes go braless. I went
through a phase, last summer, where
I did this, and it was incredibly fun
and exhilarating. I felt free. I felt
daring. I felt like yelling, “Hello, New
York City! I’m not wearing a bra!!”
But I didn’t, and then I felt like it was
this sexy secret that everyone was
probably whispering about. They
definitely weren’t, but I talked about
how empowered I was with my
friends, a lot, and that was nice. After
wearing a bra for approximately half
my life, it was shocking to realize that
actually, it was sort of optional. And
then I got stuck in this freezing cold
restaurant at a party for like four
hours, and carried on a lot of
charming little conversations with my
arms crossed over my chest. So I’m
not ready to give up on bras
completely. But I still stand by my
right to occasionally go boldly
without.
Related: 8 Ways To Beat Breast
Sweat
7. You can wear a strapless dress without
it being a big deal. I will do this, after I
stop being really scared of what will
happen if I lift my arms up. Which I
need to do all the time– as we all do.
My wedding gown was strapless. But
that was more because all wedding
gowns are strapless, and I had no
choice. Still, it was empowering. I
know I can do it again, some day, if I
keep my arms down.
8. You can do yoga without even noticing
them. I like not having to think about
my breasts when they’re not playing
an important role in whatever’s going
on. Like if I’m jogging (which I almost
never am, but it’s happened once or
twice). Or if I’m playing a sport (ping
pong), or if I need to be upside down
at any point.

9. They don’t sag. I kinda don’t want to
brag about the whole “they don’t
sag!” thing, because it sounds more
like an insult to big breasts and older
women than a compliment to smaller
ones and younger women. I’m also
not sure I want to unquestioningly
support firm perkiness. Last time I
checked, breasts were made out of
fat, and fat is squishy. And while I do
have one friend with mysteriously
perky natural boobs, and they are
indeed spectaculaïr, they are also the
exception. And softness is really nice.
Sagginess probably just means you’re
older than 35, and some day I too
hope to be older than 35. So instead
of all that– how about #9 is “They feel
good.” People don’t spend enough
time talking about how nice small
breasts feel. Sometimes I catch myself
just feelin’ mine up. It’s sort of
comforting. That is maybe the
weirdest thing I’ve admitted to on the
internet. They fit nicely in the hands.
They are like little pillows of
happiness.
10. Not to be sappy, but they do the
really important stuff. They feel good
when they’re played with. They have
the ability to provide milk for a baby,
which is badass. They’re womanly
and pretty. They’re often charming in
profile. And even though all of those
things are true for big boobs, too,
small boobs do it with their own
special style. They do it while being
awesome for all of the other nine
reasons. They might be in a strapless
dress while doing it. You never know.
Small boobs are full of surprises.
Kate Fridkis is a Brooklyn-based
columnist, freelance writer, and bagel
enthusiast who writes the blog Eat the
Damn Cake. You can follow her on
Twitter at @eatthedamncake.