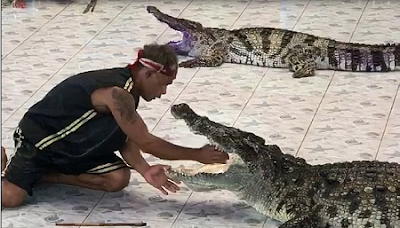 This is the moment a reptile handler was attacked by a crocodile in front of horrified spectators after he put his arm inside the creature’s mouth.

The handler, a 45-year-old named Tao, was performing the stunt at the Phokkathara zoo in Chiang Rai, northern Thailand, in front of around 100 people on Sunday afternoon.

As he reached inside the crocodile’s jaws while another keeper looked on, Tao looked at the audience and told the announcer to stop the music.

Then, the reptile suddenly clamped down around Tao’s forearm before shaking him violently from side to side.

The keeper was heard letting out an agonising scream before managing to free himself and staggering away with blood dripping on the wet tiles.

The incident was captured on camera by Khun Phusawit, 35, who was visiting the Phokkathara Crocodile Farm and zoo with his wife Nok and their two children.

‘The show was very good until that happened. I hope that the man is OK and he gets better soon,’ he said.

‘Everybody was shocked when it happened. The kids were a little bit scared.’

He added: ‘I’ve watched the clip back many times to see how it happened and the crocodile seems to not like having the hand in his mouth.’

Dong Wittawat, the owner of the crocodile park, said on Monday that the trainer who had been bitten was treated at the farm and is ‘fine.’

‘He was was treated at the farm with bandaging,’ Mr Wittawat said.

‘He loves crocodiles and he will be working again soon in the next two weeks. It is very rare for this to happen.’

The Phokkathara Crocodile Farm houses dozens of different types of animals and offers a live show for visitors. 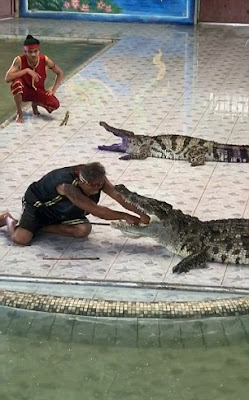 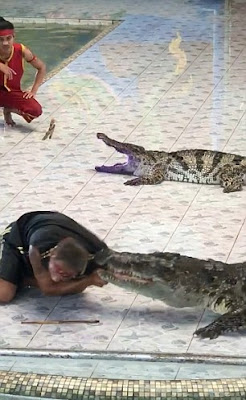 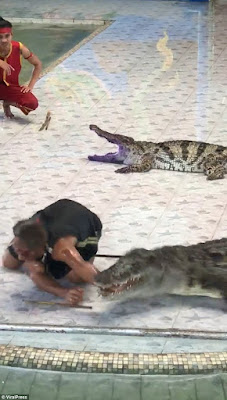