Oscar scored a first-half hat-trick, while Eden Hazard broke his duck this season and Bertrand Traore netted his first Chelsea goal in a 5-1 win at Stadium MK.

The Blues were on top from the first whistle and should have gone in front inside three minutes when Oscar squared for Diego Costa, who could not beat David Martin from close range.

Oscar then fired wide twice in quick succession before Chelsea’s dominance eventually brought about a goal in the 15th minute. Dons Kyle McFadzean was hesitant in possession and Costa pounced on his weak backpass before squaring to Oscar to slide home from close range.

Chelsea had completely dominated the opening 20 minutes, but MK were level when Darren Potter’s speculative try from distance looped up off Nemanja Matic and over Thibaut Courtois to raise the roof at Stadium MK.

Unfortunately for the home side, Chelsea were not deterred by conceding and soon resumed total dominance. Martin tipped an Hazard shot onto the post, while Costa slid in to poke wide when Oscar was waiting for an easy tap-in.

It was Oscar who put the Blues back in front, running into the box and collecting Ruben Loftus-Cheek’s pass before firing across goal and into the far corner.

The Brazilian midfielder then completed his hat-trick on the stroke of half time by curling home from the edge of the area after cutting in from the left and being given time and space by the Dons’ defence.

It was the first Chelsea hat-trick since September 2014 and the first time in over two years that a player has bagged three before half time in an FA Cup game.

Ten minutes into the second half it was four when Hazard scored for the first time in 29 matches this season, rolling home from the penalty spot after he was brought down by Potter on the left-hand side of the box.

Guus Hiddink, who is now unbeaten in nine games since taking the interim manager’s job last month, brought on Traore for Costa after Hazard’s goal and the former needed only five minutes before getting in on the act.

Hazard beat the offside trap and cut back for the 20-year-old from Burkina Faso, who tucked home with aplomb for his first Blues goal on his sixth appearance.

That would be the end of the scoring as Fabregas and Traore missed chance to make it six, while at the other end Dons substitute Daniel Powell was denied a late consolation by Courtois after a twisting run in the area. 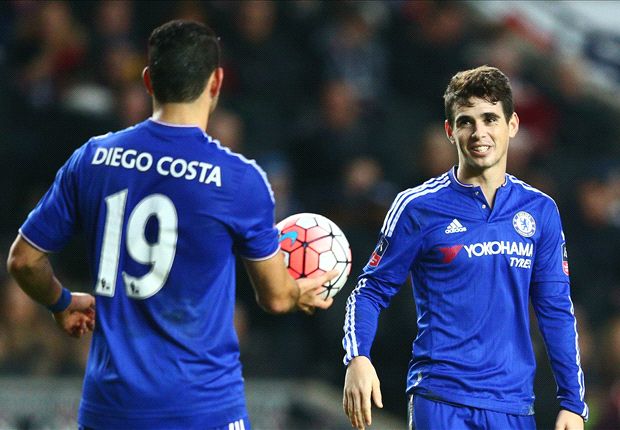