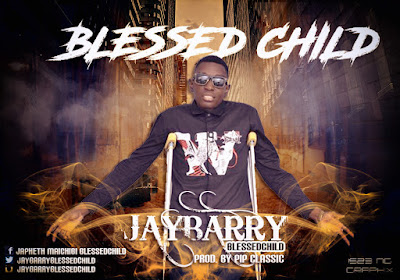 And finally it’s here,the long awaited and much anticipated song titled “Blessed child” by Japheth Ezekiel Maichibi a.k.a Jaybarry BlessedChild, from Nasarawa state,akwanga local government,Nasarawa state.
The track was co produced by PIP classic and G doc Medic,a.k.a. the one I call Dunio.. Like he said in the first bar of the song”it was October 17 the year 2014″..
Today 17th October 2017, makes it exactly 3 years he was struck down with a major crisis attack and complications that led to him being on crutches,and a replaced hip bone.
Years down,it’s been a life of torment living with sickle cell disorder,despite such torments,Jaybarry BlessedChild as he is called finds strength,hope,and trust in God and appreciates God Almighty,redirecting his energies to being TOUGHER in life instead of isolating himself to the TRAUMA..Being born with sickle cell isn’t a crime nor a curse,Jaybarry’s ability to share his pain,express his feelings with the pain he’s gone through while in dark times is one great gift he displays as an emcee, putting his lyrical ability to check by composing his story in a rhythmic way you all can relate with,he refused to let the pains hold him to it’s supposed fullest..
Like the legendary Prodigy of blessed memory (late) said…”Growing up I couldn’t always get involved with the activities with all the other kids because if I overworked my body it would trigger my pain. There were definitely times growing up, where other kids wanted to challenge me; they wanted to see if they could push my buttons and see if I could fight or what have you. Taking my kindness for weakness or taking my quietness and laid-back style for weakness. I’ve been dealing with that for basically all my life”.
The Head Nigga In Charge of Mobb Deep described his crisis pains in his master piece track titled You Can Never Feel My Pain as “I’m talking about permanent, physical suffering
You know nothing about that
You just complain cause you stressed
Ni**ga, my pain’s in the flesh,
And through the years that pain became my friend;”   Prodigy a renowned emcee who suffered the same dreaded sickle cell disorder as Jaybarry [Blessed Child] and battled the disease until his demise at age 42,he died 20th June 2017.
DOWNLOAD