The youth groups affiliated to the office of the PDP National Youth Leader, Abdullahi Maibasira have dissociated themselves from Ahmed Gulak’s self declaration as the Chairman of the PDP.

Their decision was unanimously reached after a brief meeting held in the party’s secretariat, Wadata Plaza, Abuja.

The groups in a statement jointly signed by two of their leaders, Usman Okai Austin of the PDP National Youth Frontier (PDP NYF) and Hon. Dr. Olusegun Aderemi of the PDP Young Democrats described the self declaration of Ahmed Gulak as shameful and a mark of disrespect for the party’s constituted authorities and an outright demonstration of impunity and over ambitiousness.

The PDP youths while affirming their support for the present NWC asked Gulak to support the party mechanism to ensure a free and credible convention in March 2016.

“We hereby advise him to denounce his declaration and work with the present leadership who are putting all modalities to replace all National Officials whose tenure will soon expire. And the right place for such changes should be the PDP National Convection. We are hopeful that the new leadership will reposition the Party ahead of the 2019 general election when Nigerians will give power back to the PDP and free us from this inept APC government who has turned its promise of change slogan to a change of promise”, the group posited.

Speaking further, the group said the implication of this action is that anybody else from the North-East can as well declare himself the party‘s Chairman which will definitely set a very bad precedent. 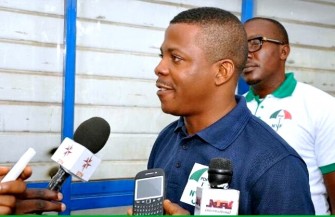