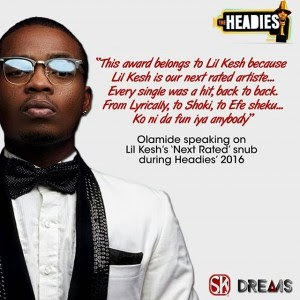 The organisers of the Headies have been attacked once more from a veterant DJ Jimmy Jat for placinging money above intergrity,

Below is DJ Timmy‘s open letter:
“When i wrote my first open letter to Headies on December 29, 2013, the majority opinions I got was that I was correct while others felt I was just an “Attention seeker”. Headies as an award should be credibile and not just over hyped. We have hundreds of award shows every year in Nigeria and they are not as controversial as this one. Headies as an award are still not appreciating certain artiste, producers, entertainers and Dj’s who work 24/7 to make sure they bring out the best. They give us the impression that once you are not nominated or you do not win, you have not started your career;This is a BIG LIE. Over the years, All Ayo Animashaun and HipTv family have proven that it is Money over Integrity and that is why he always ignores the choices of majority of Nigerians or could it be that they innocently dont even know what they are doing?
I am not here to analyse the faults of headies in full but you can read the other complains on twitter with the hashtag #TheHeadies2015.
Firstly, I noticed your hall was half empty. Your live broadcast that you always brag about had the picture quality of NTA channel 10 and your technical crew were going offline every time things became awkward and they immediately have to switch to “lyrics on the go” to cover up your shame. I watched BET African awards live and Mtv and i can see a very huge difference in all aspects. You still have a lot to learn.
Another disturbing fact is that headies as an award is creating bad blood among colleagues in the Nigerian music scene. Headies is the reason why we have not seen collaborations among certain musicians. Tell me why Phyno,Davido, Falz, Solidstar and many other music producers and artiste who have been topping charts this year where not recognized?
Next Rated
Now Of all the categories, this is the only one worth arguing over.Even though this is not a voting category, I stand by million of Nigerians to say thatLil Kesh or Kiss daniel deserve the award. What are the reasons? Lil Kesh has more hit tracks, Swag, Stage performance, Composure and in the long runLil Kesh may last longer for years to come. Infact, I will rather invest N10m on Lil kesh career than Reekado’s. That is not to say Reekado is not hardworking or he does not have the talent but lil kesh has that special something. Infact Reekado still does not have any Hit track to date. Yes !!!!! I say that with all sense of authority. Songs like Corner, Sugar baby, Catapult are NOT hit tracks, they are just popular and they could have gone National but they are NOT hit tracks. Dont confuse a popular song with a Hit track. Let me explain, As a DJ if I dont play “Gbese” “Efejoku” “Shoki” “Reggae Blues” “Woju” “Laye” “Godwin” at any party, i will have loads of people coming to request for them but people dont disturb me if i do not play Reekado banks songs. Do you get the point? In fact another proof Reekado still does not own a hit track is that an average Nigerian parent who do not follow music still know songs like “Woju” “Bobo”, “Ojuelegba” and “Efejoku”. While i was writing this, i played reekado’s songs to the older generation and they claimed never to have heard them.
In conclusion
All Nigerian artiste and producers, do not place your hope on the Headies which should now be referred to as “The Leggings”. Do not say because you where not recognized it means you are not trying, keep doing what you are doing and let the Headies keep on doing what they are known for – NONSENSE.. !!! Do not forget to send your insults and blessing to the writer @Baddestdjtimmy and tell me exactly how you feel. I also need someone to clear this please, Don Jazzy said ” The organizers told him to call Reekado to come…So he left Alibaba’s show” Does that mean he knew Reeky was going to win that category? Cynthia Morgan was absent and i am sure the organisers did not tell Jude Okoye to tell Cynthia Morgann to rush down there.”
You be the judge !!!!!